In this section we present data for some of the public health outcomes that are most relevant to young people 10-24, particularly those relating to health behaviours.  Separate sections present data on life expectancy, mental health and sexual health 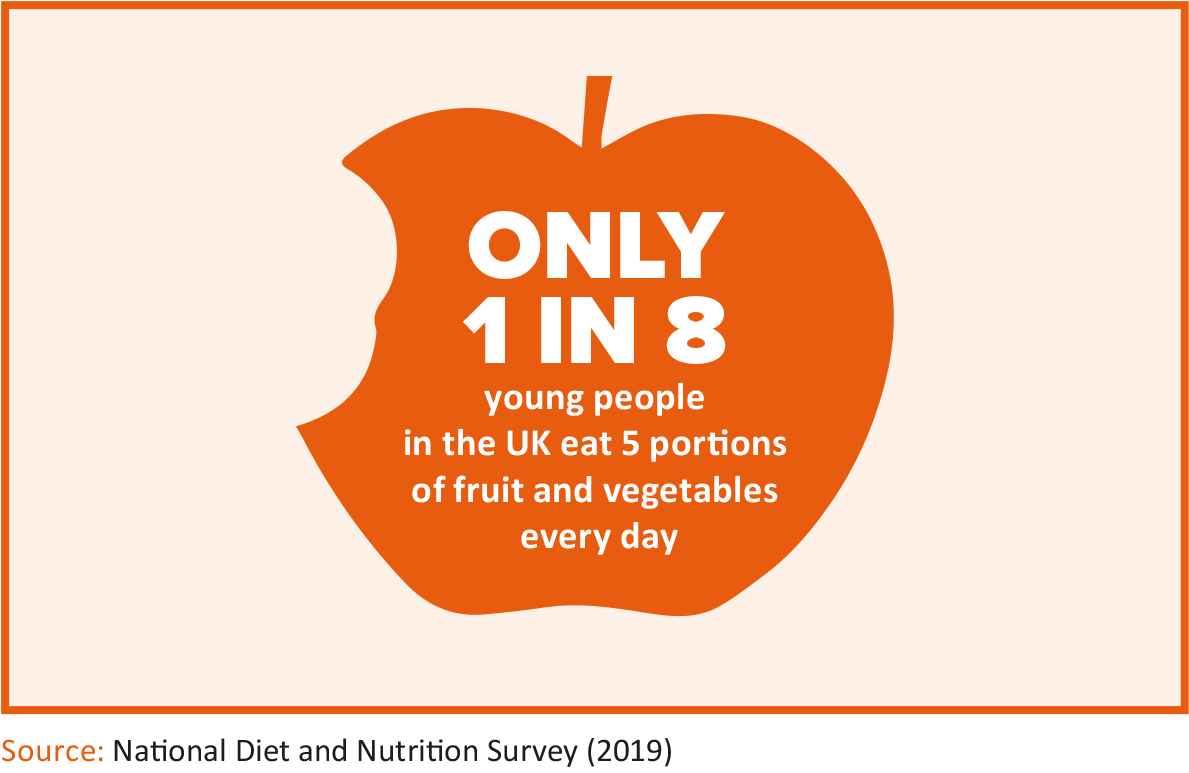 Smoking, drinking and drug use

For every three young smokers, only one will quit and one of the remaining smokers will die from tobacco related causes (APPG on Smoking, 2020). Concern about levels of smoking among young people arises from awareness about the long-term outcomes such as cancer, but also the short-term negative effects such as respiratory illness and impact on physical fitness. 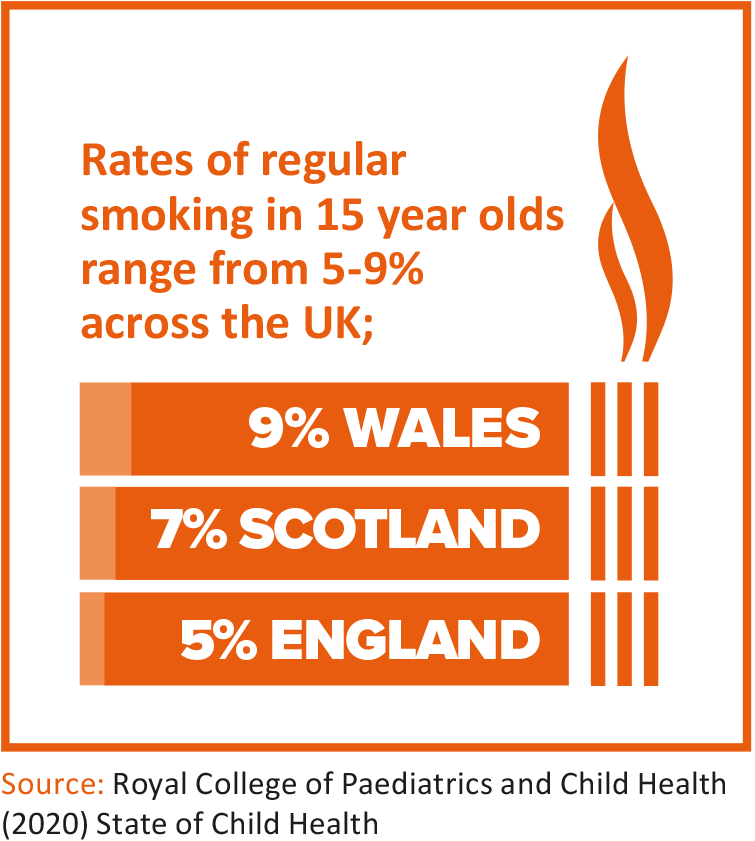 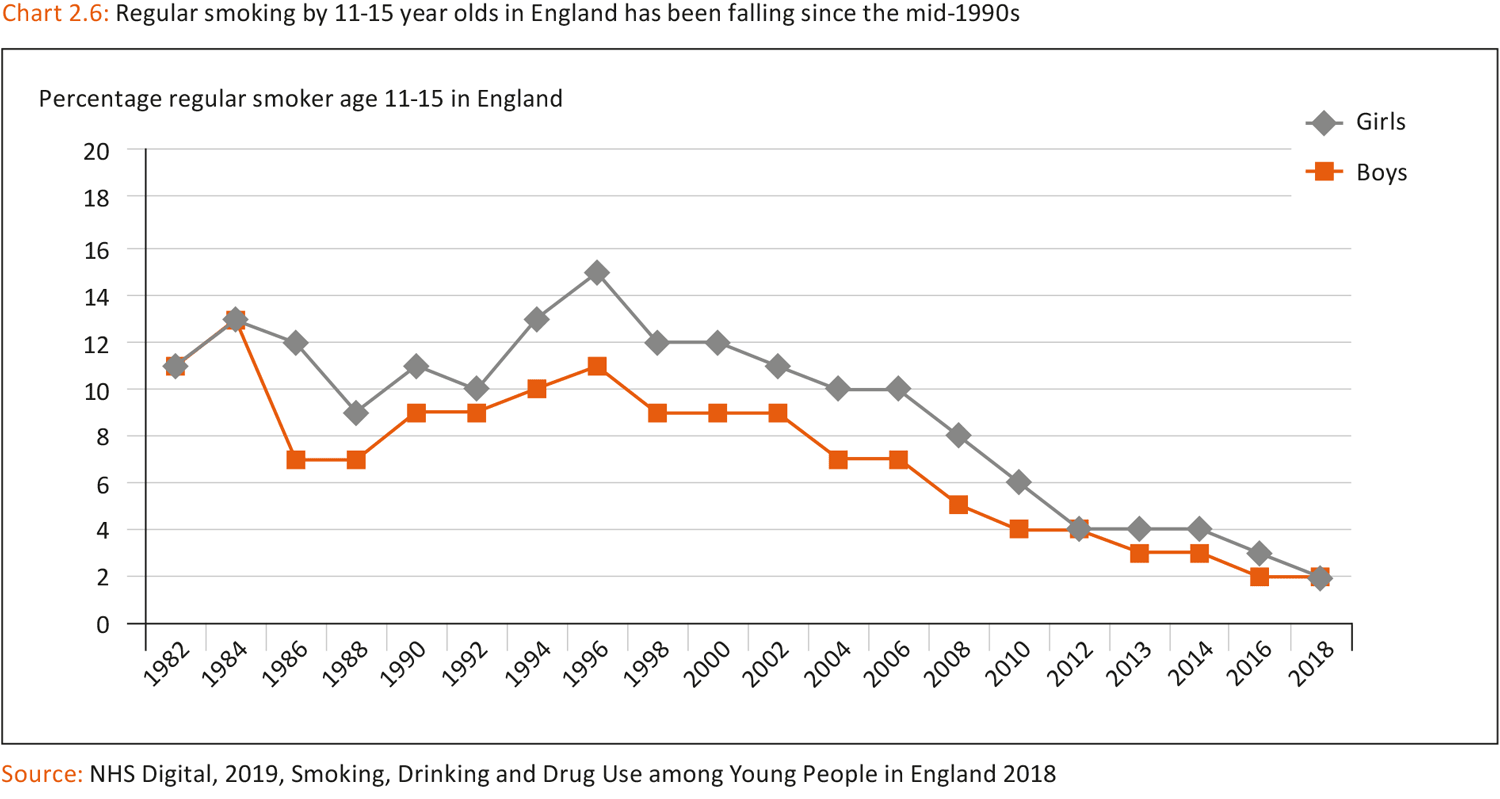 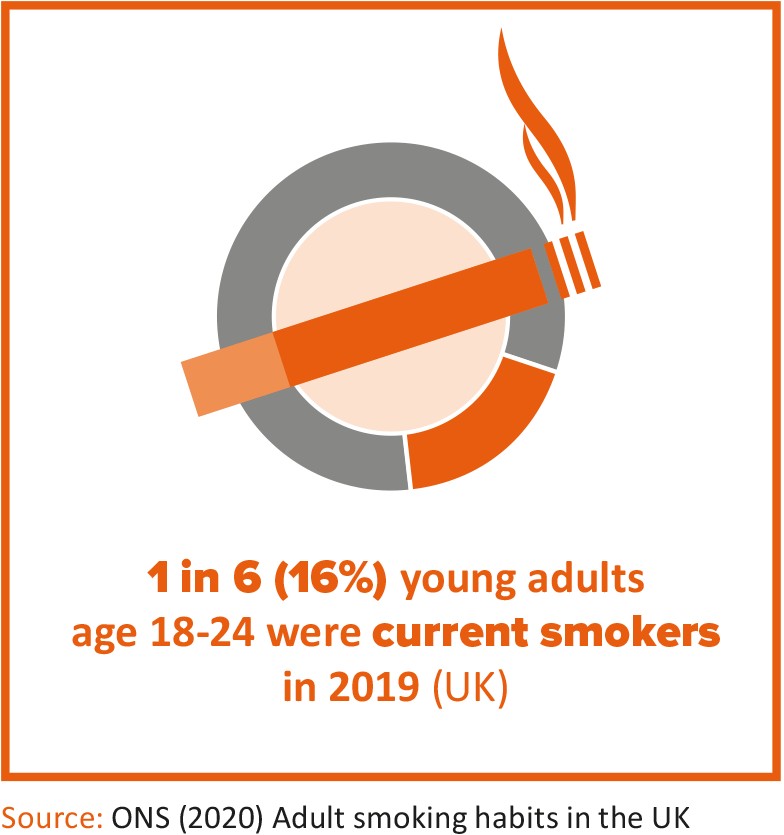 There is an increase in smoking prevalence as young people head into their late teens and early 20s. The Health Survey for England suggests that almost 1 in 5 young adults aged 16-24 are current smokers (20.7% of young men, 15.2% of young women), a considerable increase on the younger age group [NHS Digital, 2020c].

However, the overall downward trend seen in the younger age group is also apparent in the older age groups of 16-24 year olds, demonstrated in Chart 2.7, although the fact that approximately a fifth of those aged 16-24 are current smokers is still a serious concern. 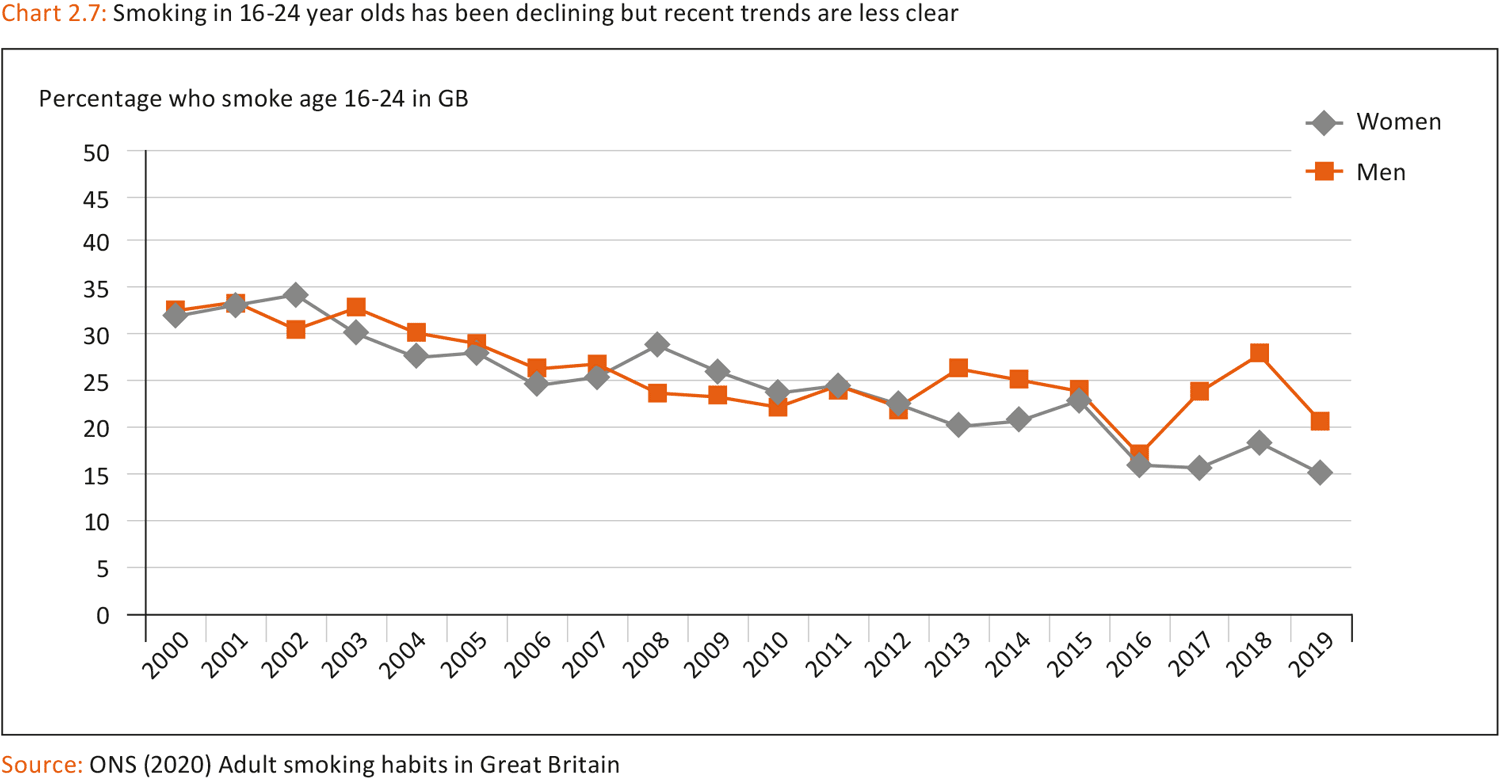 The APPG on Smoking and Health (2020) noted that children growing up in communities where smoking is the norm are not only more likely to be exposed to second hand smoke but are significantly more likely to become smokers themselves. Among mothers whose smoking status was recorded, a quarter of pregnant women under 24 at time of booking (first maternity appointment) smoked. This rises to a third of those under 18, compared to an overall average of 12.7% for smoking at booking for all pregnant women (APPG on Smoking and Health, 2020).

The SDDU survey of 2018 reported that 2% of 11-15 year olds in England were regular users of e-cigarettes, with 6% saying they were current users (NHS Digital, 2019). For 16-24 year olds, the latest Health Survey for England 2019 reported that the prevalence of e-cigarette use was 6.6% for men and 5.3% for women (NHS Digital, 2020c). Estimates from the ONS Opinions and Lifestyle Survey 2019 were a little lower for the same age group (Office for National Statistics, 2020).

The NCMP also shows inequalities by ethnic group, with rates extending from 19.4% in white groups, to 29.7% in Black groups, and other ethic groups falling in between (NHS Digital, 2020a).  There is also evidence from primary care that rates are higher for young people aged 10-24 with learning disabilities (NHS Digital, 2020b).

Obesity in 16-24 year olds is measured using BMI rates themselves, rather than their position on percentile charts.  A BMI of more than 25 is considered a measure of overweight, and a BMI of 30 or more is considered a measure of obesity.  Chart 2.5 presents the proportions of 16-24 year olds who were obese, by gender, in England from 2003 to 2019.  In 2019, 11% of young men and 20% of young women in this age group were obese.  Rates reported in the Scottish Health Survey 2017 for this age group were very similar, at 14% for young men and 21% for women (Scottish Government, 2020). 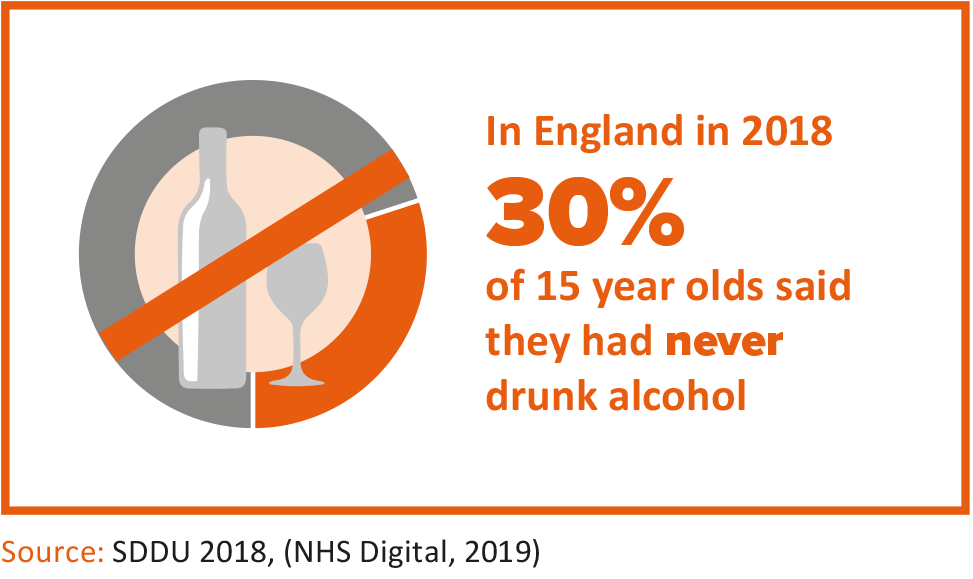 Adolescent alcohol consumption patterns have also generally showed a decline over the last couple of decades.  In 2018 the English SDDU survey reported that 56% of secondary school pupils aged 11-15 said they have never drunk alcohol.  The majority had tried it by the time they were 15 (68%), but only 23% of 15 year olds had drunk it in the previous week (NHS Digital, 2019).

Estimates of alcohol consumption by 11-15 year olds from around the UK are also available from studies such as the Scottish Schools Adolescent Lifestyle and Substance Use Survey (SALSUS), although the data relate to slightly different years and sometimes different questions are asked.  Despite this, reports tend to be generally comparable.

Chart 2.9 shows that although rates of drinking among secondary school aged children as reported in the English SDDU are still historically very low, the trend is less clear since 2014.  However, the question on alcohol consumption was changed in 2016, as it appeared there may have been some underreporting previously due to a misunderstanding around what a ‘proper’ or ‘low alcohol’ drink was (both elements included in the original question). 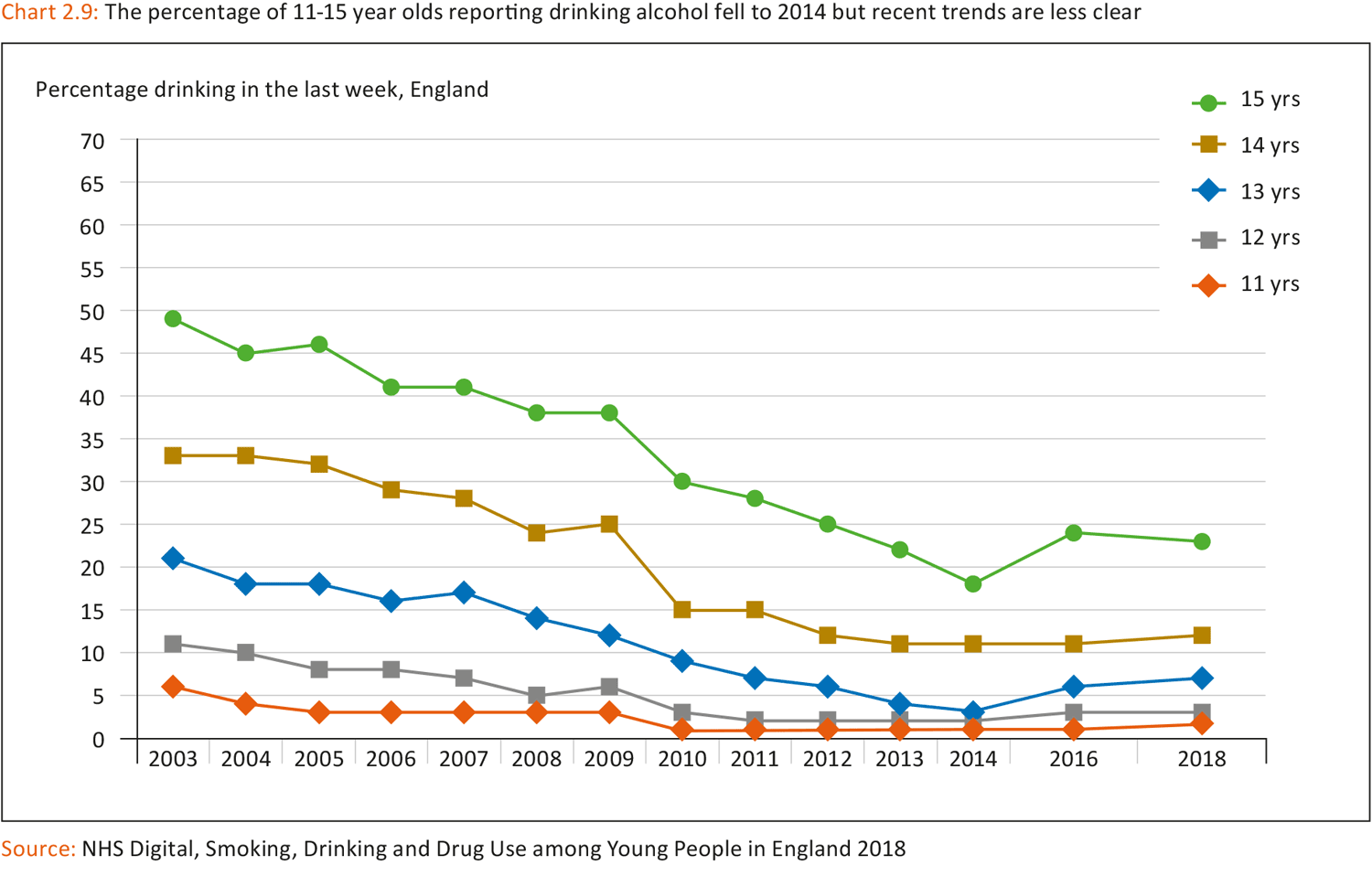 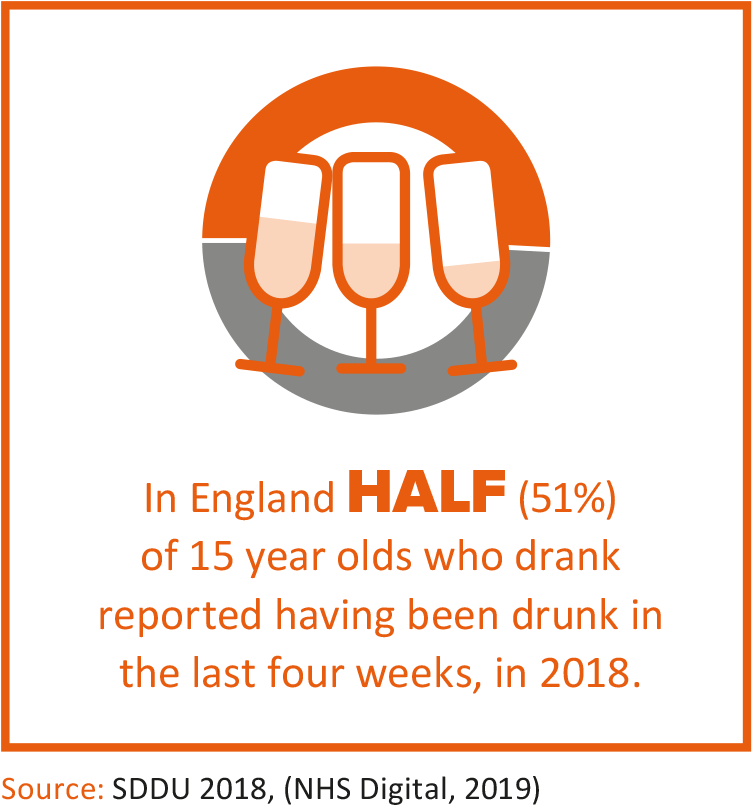 Being drunk is a key indicator of alcohol misuse.  In the SDDU study 43% of 15 year olds who admitted drinking reported being drunk in the last four weeks (NHS Digital, 2019).  However it is interesting to note that alcohol is not negatively related to deprivation for this age group. The English Smoking, Drinking and Drug Use survey in 2019 showed that among 11-15 year olds, those in areas of higher deprivation had lower rates of regular drinking (NHS Digital, 2020).

Higher proportions of older teenagers and young adults drink compared with the younger group, with only about a fifth saying they have not drunk in the last year (26% of 16-24 year olds, Health Survey for England, 2019). Approximately one in five young people report drinking in the risk categories (NHS Digital, 2020c; Scottish Government, 2020).

The long-term trend has also been for a decline in drinking in this older age group aged 16+ but again recent trends are less clear, as shown in Chart 2.10. 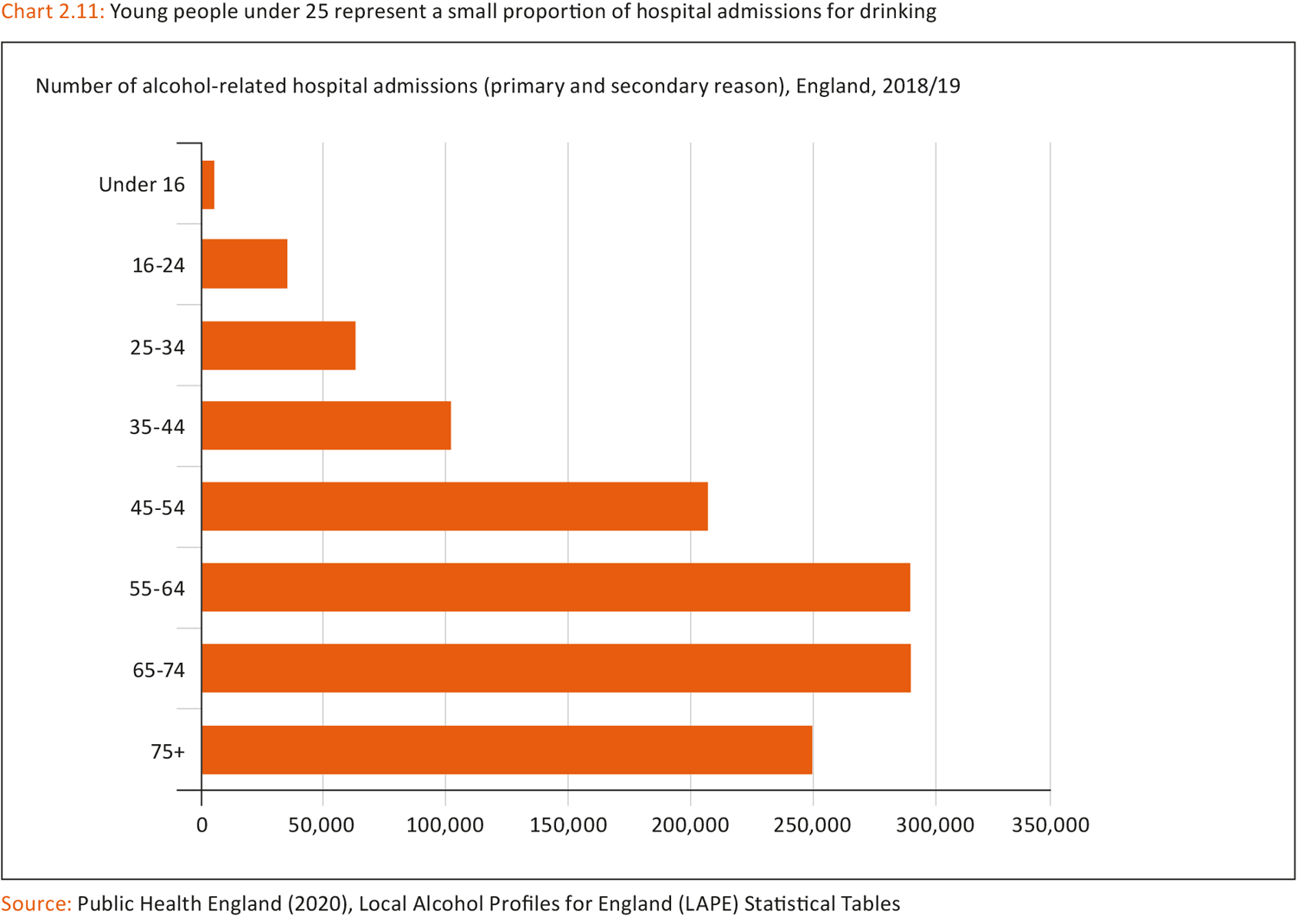 It is difficult to give accurate estimates of young people’s drug use.  Changes in popularity and availability of drugs influences trends, the questions used differ over time and between surveys, and self-report has potential limitations because of legality issues.  Chart 2.12 reports on the proportion of illegal drug use reported by the school population aged 11 and 15 in England over the years from 2001 to 2018, as reported in the Smoking, Drinking and Drug Use surveys.  Overall, the proportion of the school aged population who had reported using illegal substances in the last year in England saw a downward trend between 2001 and 2016, but psychoactive substances were included in this measure from 2016 and so data before and after then are not comparable.  The most common drug to have been used was cannabis.  On the other hand, estimates in Northern Ireland are much lower; the NIRSA 2019 survey reported that 4.6% of 11-15 year olds had used illegal drugs ever (NISRA, 2019).  The SDDU data shows no relationship between drug use in this age group and ratings of area deprivation (NHS Digital, 2019). 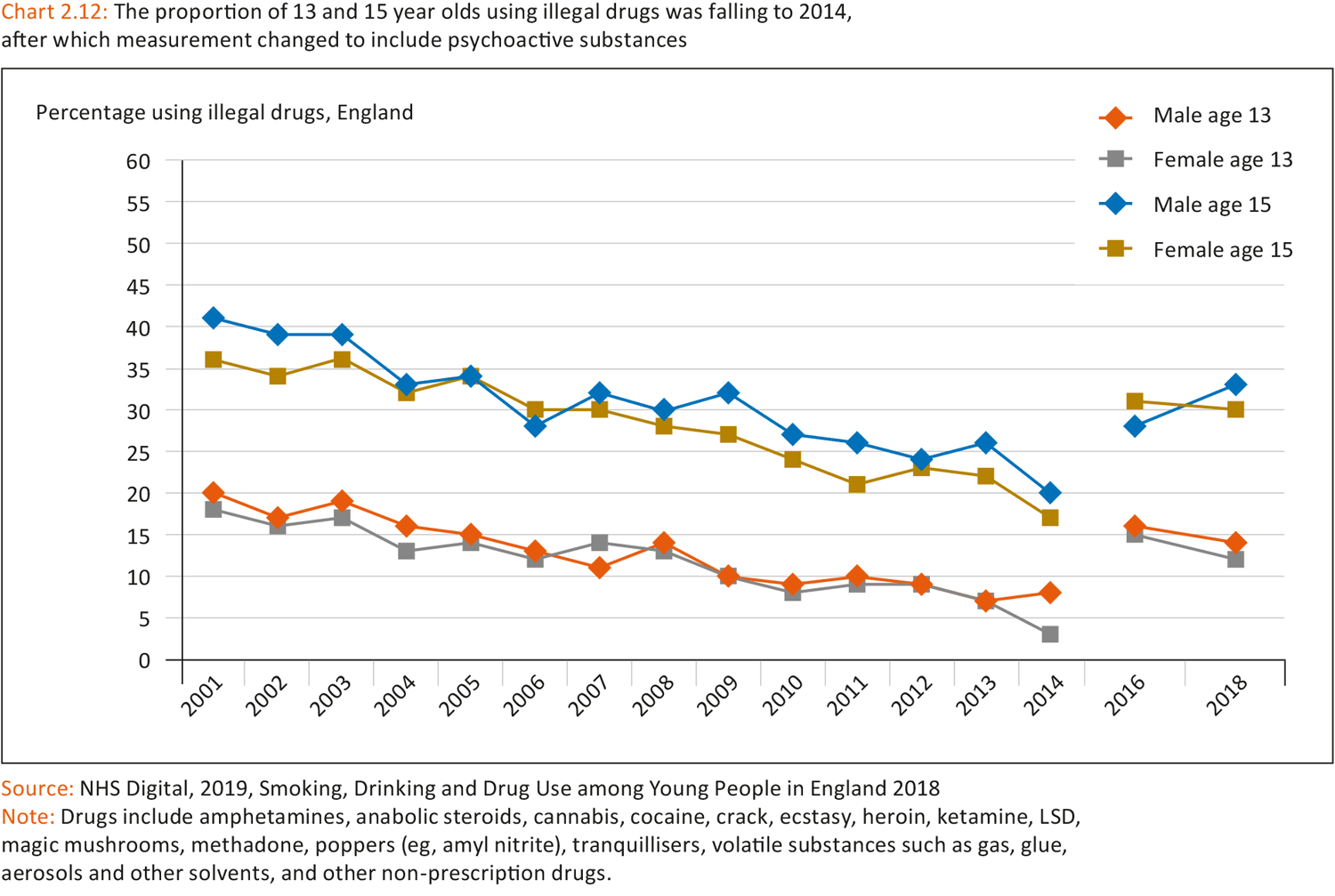 Among 11-15 year olds trying drugs for the first time, use is mostly driven by desire to see what it is like. 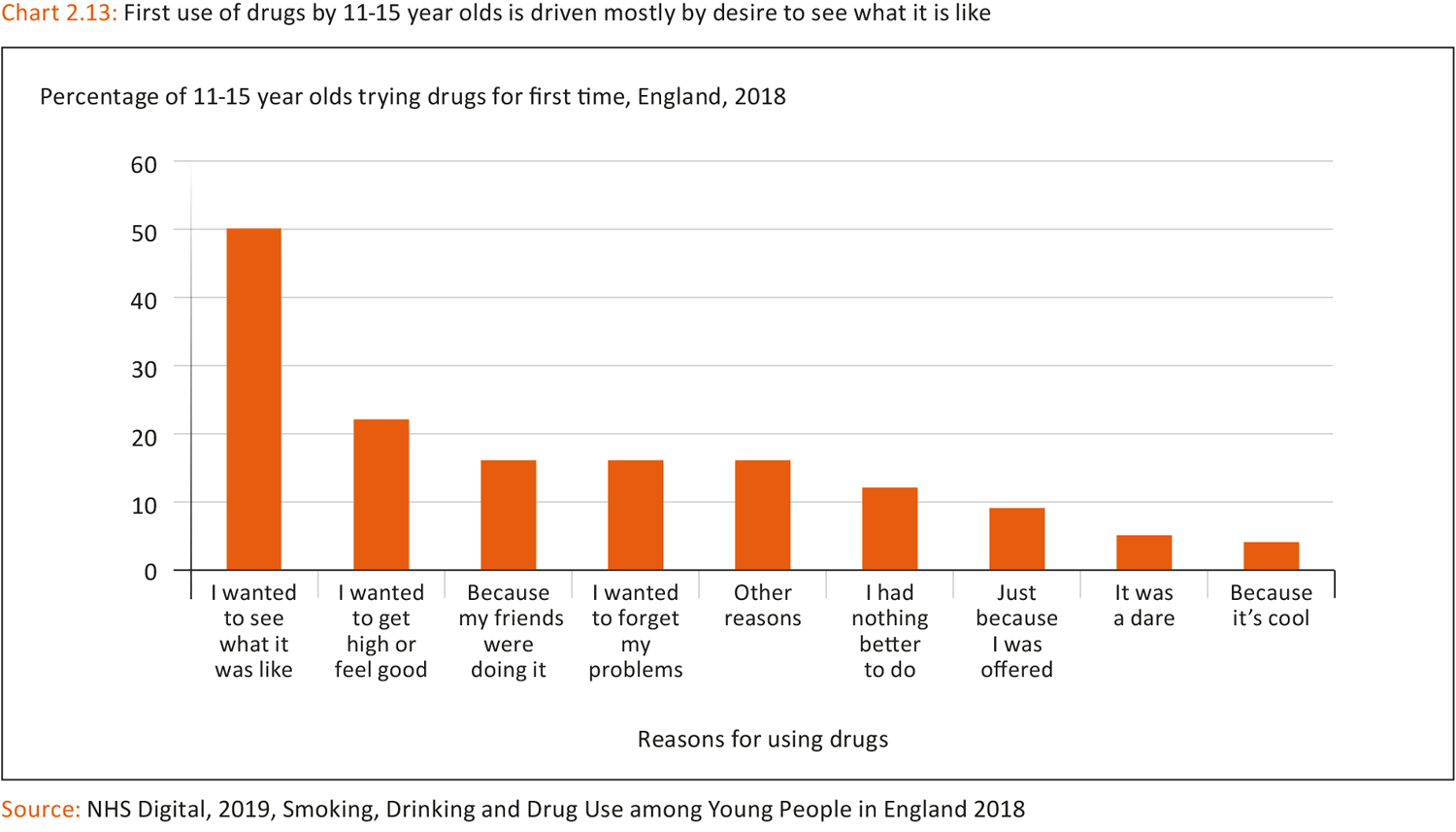 Among the older age group of 16-24 year olds, the Home Office 2018 misuse of drugs (England and Wales) survey shows that around a third of this age group report ever having used a drug in their lifetimes. 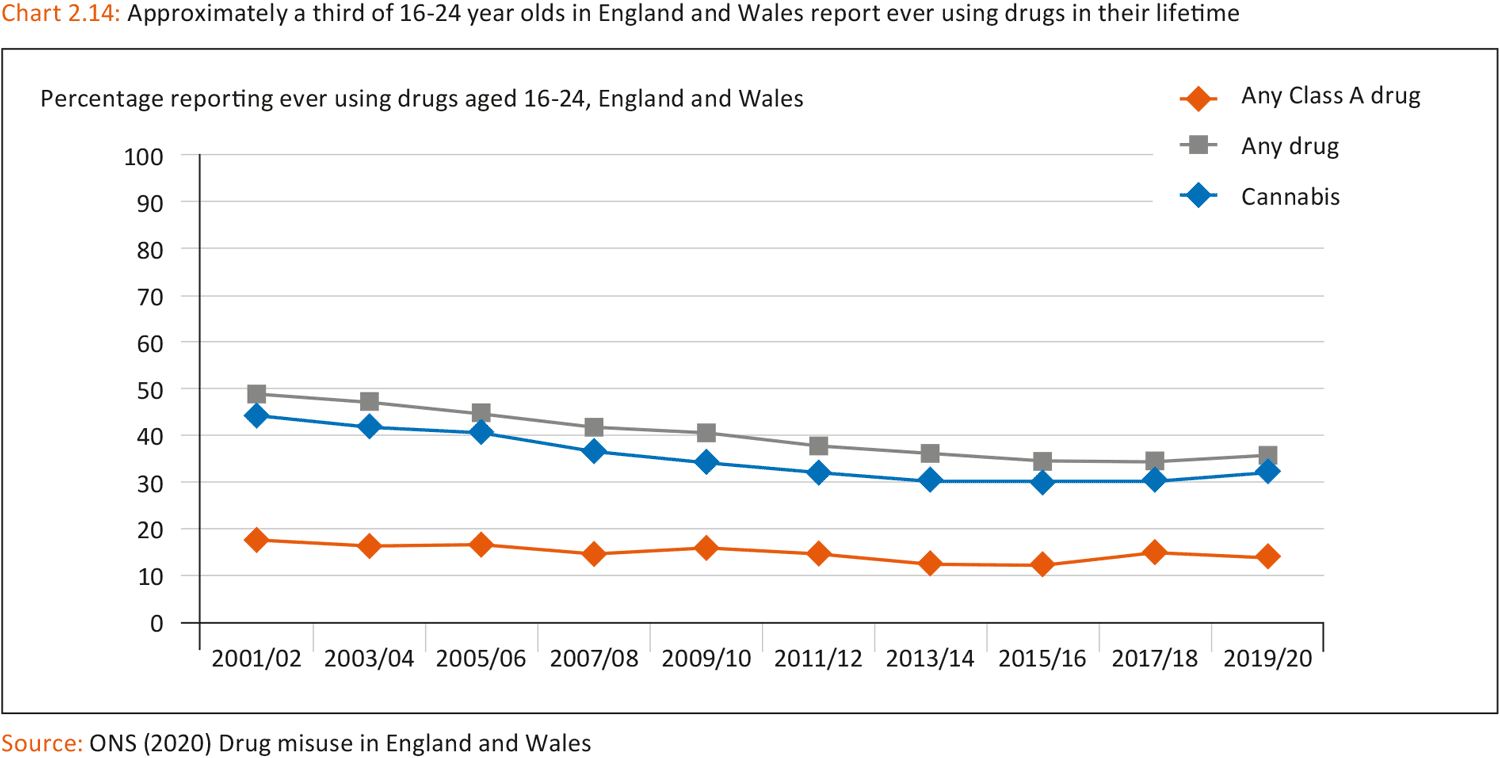